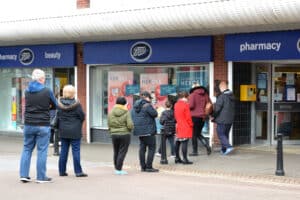 Britain is on track for a consumer spending boom this summer with new figures revealing that people splashed out on food, drink and clothes last month.

Consumer spending rose by 7.6 per cent in May compared with the same month in 2019, according to Barclaycard, marking the highest growth recorded by its survey since the start of the pandemic. Spending on essential and non-essentials increased as people started socialising again with family and friends.

The findings provide further evidence that the country is enjoying a strong economic recovery as households spend some of the hundreds of billions of pounds of savings they built up during lockdown. Analysts at the Bank of England believe that people will run down 10 per cent of their additional cash over the next few years while also committing some of it to property and other investments.

Economists have forecast that the rise in consumer spending could lead to the economy growing by as much as 6.5 per cent in the second quarter of the year and by 8 per cent in 2021 as a whole. This would be the fastest growth rate since the Second World War.

Barclaycard said spending rose by 17.7 per cent at supermarkets, 69.3 per cent at specialist food and drink stores such as butchers, by 8.5 per cent on clothing and by 17.8 per cent on health and beauty.

Households also started preparing for domestic holidays and trips away. Resorts and accommodation providers enjoyed growth of 25.5 per cent, while spending on entertainment, sports and outdoor retailers jumped by 47 per cent.

Spending at restaurants and bars also recovered, recording smaller declines compared with 2019 than they did in April after people were allowed inside again from May 17. Restaurant spending was 53 per cent down compared with 2019, with pubs and bars down by 19.4 per cent. That compares with respective drops of 74.4 per cent and 67.2 per cent the previous month.

The data relates to transactions between April 24 and May 21 on Barclaycard credit cards and Barclays debit cards. The survey covers almost half of all card transactions during the period.

A separate report by the British Retail Consortium and KPMG also found that a consumer-led recovery was under way. It said that retail sales had risen by 10 per cent in May compared with the same month 2019.

Helen Dickinson, chief executive of the consortium, said: “Retail sales were buoyant in May thanks to the reopening of hospitality, coupled with the afterglow of non-essential retail’s own return. Pent-up demand for the in-store shopping experience, as well as the first signs of summer weather, helped retail to the strongest sales growth of the pandemic.”

Businesses are stepping up recruitment to cope with the surge in demand, but many are struggling to find suitable workers to fill key positions, which is putting upward pressure on wages and prompting fears of higher inflation. Manpower, the employment group, said that hiring intentions were at a six-year high, with the strongest growth of any European country except Ireland.

Chris Gray, director of ManpowerGroup UK, said: “Sectors like hospitality have never experienced anything like this sudden snapback in hiring. The war for talent is hotting up. Employers are desperate to hire experienced chefs, waiting staff, retail workers and more, not least many due to post-Brexit skills shortages in many of these roles.”

“After the weakest 12 months for the UK’s jobs outlook in 30 years, employers are raring to get back to normal and capture the wave of pent-up consumer demand. The employment outlook has seen the sharpest quarter-on-quarter increase since 2002 and the largest year-on-year record to date. Much of this is likely to be companies making up for hiring freezes and redundancies undertaken over the past 12 months. The dramatic growth in hiring intentions among small and mid-sized businesses is a shot in the arm for the UK.”

Manpower found that the proportion of employers struggling to fill certain skills had more than doubled from 35 per cent in 2019 to 77 per cent in 2021. “Three quarters of employers are currently struggling to meet skills shortages — which is the highest in Europe and one of the highest globally,” its report said. “The skills shortage has also had an impact on pay. In the logistics sector, we’re seeing wages for drivers increase by as much as 20 per cent.”

Raheel Ahmed, head of consumer products at Barclaycard, said: “May was a positive month . . . with the nation clearly determined to show support for retailers and local businesses.”

Quad leaders to deliver on vaccines, infrastructure, tech — US official

Battling fraud — An evil in our digital world

A MAN walks along a nearly empty street in Seoul, ...

TikTok, the leading destination for short-form mobile video, collaborated with ...

September 24, 2021 September 24, 2021
Load More
Get the daily email that makes reading the news actually enjoyable. Stay informed and entertained, for free.
Your information is secure and your privacy is protected. By opting in you agree to receive emails from us and our affiliates. Remember that you can opt-out any time, we hate spam too!